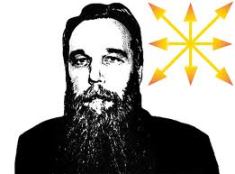 Alexander Dugin, with the help of Arktos’ John Morgan, has recently published an essay, On White Nationalism and Other Potential Allies in the Global Revolution. The essay is almost entirely on point, and is mostly an excellent and impressive statement of Traditional principles. However, Dugin errs when it comes to discussing race and the Jewish question, and displays a misunderstanding of both the Traditionalist worldview and the realities of race. As an inhabitant of nearly all-white Russia, his lack of experience with the negro and lack of understanding of the Jewish role in America politics likely contributed to those errors.
Dugin is an advocate of what he calls Eurasianism. Eurasianism seeks a multi-polar international order based on the organic ethno-cultural unities among the European and Asian peoples, in opposition to the multiculturalist, one-world internationalism of the American and British systems—what Dugin calls Atlanticism. There are variants within Eurasianism, and in the West, Eurasianism has tended to attract the idiosyncratic types who glory in creating variants just to show they are in opposition to everyone. For our purposes, though, we shall typify Eurasianism with its best expression.
Practically, Eurasianism promotes the nationalism of Russia, China, Iran and India, and a host of other states, against American imperialism and the American push for a one world democratic order. However, while attacking the idea of an ultra-liberal New World Order. Eurasianism often embraces the ideologies of that order, particularly anti-racism and opposition to anti-Semitism, as well as Holocaust affirmation and opposition to Adolf Hitler. This contradiction often reflects the fear of the Jews and of the laws they have caused to be passed in many states as it does real conviction, but the embrace of these international list doctrines also creates fatal internal contradictions in the Eurasianist worldview.
Historically, Eurasianism draws from diverse philosophical tendencies. Most prominent is left-wing National Socialism—the wing of the National Socialist German Worker’s Party which, in the 1920s and 1930s, sought an alliance between the Reich and Soviet Russia as a check to American-British imperialism. Eurasianism also draws from an idealized, and mostly hypothesized, Stalinist national communism. This historically erroneous worldview posits that Stalin was a great ruler of the Russian people, whose “socialism in one country” was not Communist in the bad, Jewish sense, but a nationalist reaction to Trotskyite internationalism.

Lastly, Eurasianism draws from the Radical Traditionalist worldview of Rene Guenon and Julius Evola, without the nationalist Socialist interpretations of Savitri Devi. In doing so, Evola’s actual ties to National Socialism are generally ignored or misrepresented, and his writings are purged of anti-Semitic and racial statements—a falsifying revisionism similar to that applied to Stalin.

Yet, at its best, Eurasianism’s ideology of a multi-polar and nationalist Europe and Asia most likely describes the world system that will dominate the 21st Century. At its worst, historical figures—like Anglo-American agent Otto Strasser and his Black Hand movement—are tortured into new interpretations which support this Twenty-first and not Twentieth Century philosophy.
Dugin’s Views
Alexander Dugin is easily the most important Eurasianist thinker, though he publishes primarily in Russian and has not been easily accessible to English- language speakers. Dugin’s essay On White Nationalism was assembled by John Morgan, and is a concise exposition of Dugin’s philosophy. Dugin’s thesis is succinctly laid out in the second and third paragraphs which state:
“Those from either the Right or Left who refuse American hegemony, ultra-liberalism, strategic Atlanticism, the domination of oligarchic and Cosmopolitan financial elites, individualistic anthropology and the ideology of human rights, as well as typically Western racism in all spheres… and who are ready to cooperate with Eurasian forces in defending multi-polarity, socio-economic pluralism, and a dialogue among civilizations, we consider too be allies and friends.
“Those on the Right who support the United States, White racism against the Third World, who are anti-socialist and pro-liberal, and who are willing to collaborate with the Atlanticists; as well as those on the Left who attack Tradition, the organic values of religion and the family, and who promote other types of social deviations- both of these are in the camp of the foe.”
This is, essentially, the populist philosophy of my friend Willis Carto and the American Free Press, as well as the philosophy of modern National Socialism, with two exceptions: One, it contains an overly broad denunciation of so-called White racism” and Two, it fails to name or even admit the roles of Judaism and Zionism- and the Zionist Entity in Palestine- in creating and promulgating American hegemony, ultra-liberalism, financial elites, human rights, and the rest.
As Dugin continues, it becomes clear this error comes from a misunderstanding of Traditional philosophy and the realities of race:
“ I consider the White nationalists allies when they refuse modernity, the global oligarchy, and liberal-capitalism…when White nationalists reaffirm Tradition and the ancient culture of the European peoples, they are right. But, when they defend the United States, Atlanticism, liberal or modernity; or, when they consider the White race, the one which produced modernity in its essential features, as being the highest and other races as inferior, I disagree completely.”
And this is the root of Dugin’s hostility, the belief that the White race and not the Jews, has been the producer of modernity. This error leads to Dugin’s misapplication of Tradition to the modern world and his statement that:
“I do not believe in any hierarchy among peoples, because there is not and cannot be any common, universal measure by which to measure and compare the various forms of ethnic societies and their value systems.”And also that “The idea of the nation is a bourgeois concept concocted as a part of modernity in order to destroy traditional societies, which are empires.”From its humble beginning, Dugin’s error balloons, consuming an entire section of his worldview.
The Cultural Soul
In On White Nationalism, Dugin cites a criticism of his Fourth Political Theory—the successor to Gadafi’s Third Political Theory- made by Michael O’Meara, a proponent of Francis Parker Yockey’s  Imperium. Yockey’s theories, though, derivative of Oswald Spengler’s, and it is in Spengler’s theory of the culture organism with a culture-soul that we find what Dugin’s theories lack.
Spengler states, in the Decline of the West, that individual human beings exist primarily as part of larger organic wholes. Social stratification- caste- is like the division of functions between organs in the body, and human beings are like cells within those organs, each properly dedicated to a specific task. Cumulatively, the culture-organism is transcendent and possessed of a higher living nature—a soul.
This notion of the organic unity of man is Aryan and Indo-European in origin, and is similar in its positing of human archetypes to Platonic idealism, in which individual beings are representations of idealized forms which emanate from the One creator. The Greek daemon, the Roman victory, the Egyptian ba, and the Nordic fylgja and valkyrie all reflect this view of transcendence- as they are the ideas with which the individual seeks unity.
The Radical Tradition of Guenon or Evola presupposes the existence of a collective culture-soul. Evola, in his Notes on the Third Reich, reiterates his observation from Revolt Against the Modern World on the importance of the idea of suum cuique- each thing in its place- to Tradition. The guiding principle of Tradition is Order- Order among man and between them- and the process of breaking men from this natural social order Evola calls individuation in his Men Among Ruins.

To support multi-polarity and Traditional counter-revolution, one must support organic social entities with an ethno-cultural basis. Modernity- what Dugin opposes—is the effort to organize men without regard to these essential unities. In America, this Traditional potential is only found in white racial nationalism. Once one accepts the organic ethno-cultural state as the building block of international order, one has to accept that these states will limit immigration and expel excessive alien elements which penetrate them.

(Resposted courtesy of Harold Covington and the Northwest Front)