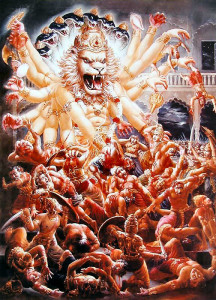 Let’s have a look at Vishnu for a while. Most people will be aware that Serrano created a mythos of esoteric Hitlerism which incorporated Hinduism. Most of this is derived from the tale of Kalki, the final avatar of Vishnu – Serrano chose this specifically because the Puranas actually do say that Kalki will remove all the mlechha (outcaste people/foreigners). Kalki is also supposed to bring a return to the Hindu Golden Age. Needless to say that World War II did not bring a Golden Age for anyone. I tend to dismiss Hitler as Kalki writings by Serrano on the grounds that there is currently no Golden Age anywhere, for any country. But Kalki is only the final incarnation – the previous ‘avatars’ include the Buddha and Krishna – and my personal favourite, Vishnu no#4, Narasimha. As you can tell from the picture, Narasimha has a ‘tough stance’ on sinners.

Narasimha, ( Sanskrit: “Man-Lion”) fourth of the 10 avatars (incarnations) of the Hindu god Vishnu. The demon Hiranyakashipu, twin brother of the demon overthrown by Vishnu in his previous incarnation as Varaha, obtained a boon from the god Brahma that he could not be killed by man or beast, from inside or outside, by day or by night, and that no weapon could harm him. Thus, feeling secure, he began to trouble heaven and earth. His son, Prahlada, on the other hand, was a devotee of Vishnu, even though his father threatened his life because of it. One day the demon challenged Prahlada and, kicking a stone pillar, asked: “If your god is omnipresent, is he in this pillar also?” Vishnu emerged from the pillar in the form of a man-lion and slew the demon at dusk on the threshold.  […] The animal aspect is shown by a curly mane of hair, sharp, curved teeth, and leonine facial features. The body, though human, has a thick neck, large shoulders, and slender abdomen and waist. Seated images of Narasimha are also found in which the lion face has a pacific expression.