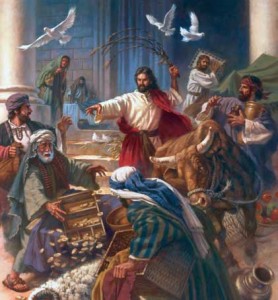 Today, the rebel leader Jesus Christ, leader of the anti-Zionist Christianity cult which has threatened to topple the Roman Empire is to be executed by crucifixion.

Jesus Christ, a notorious trouble-maker in Jerusalem has been caught violently tipping the tables of Jewish money lenders in the temple shouting “MY HOUSE SHALL BE CALLED A HOUSE OF PRAYER’; but you are making it a ROBBERS’ DEN!”

Jesus Christ is also believed to have composed the New Testament in encrypted language consisting of complex numerology which the Roman Empire cannot decipher at this point in time. They have stored the text in case one day someone can decode the New Testament.

It was put before the people yesterday in a juridical process in line with Jewish Tradition and asked if they would rather free the murderer Barabas or Jesus Christ. The people  unanimously decided Jesus Christ was more dangerous and released Barabas. Pontius Pilate, a prominent official of Rome says;

“I’m glad to wash my hands of the affair. Jesus Christ is the most obnoxious revolutionary to ever trouble our empire. But there was no way he could topple it, except with that cult of his. I expect all the Christians to disappear once Jesus has been publically tortured and executed….after all it’s not like he’s going to come back from the dead is it?”

The Roman Empire, following the death of Jesus Christ, expects to live another few thousand years with Jesus Christ gone. The massacre in Gaul is set to continue.