Parody or nascent truth? Bill’s trial suggests that it is not safe to say anything online that is not completely dull, banal, or bourgeois lest it be taken out of context. Bill White may have encountered ‘Project Truthy’. 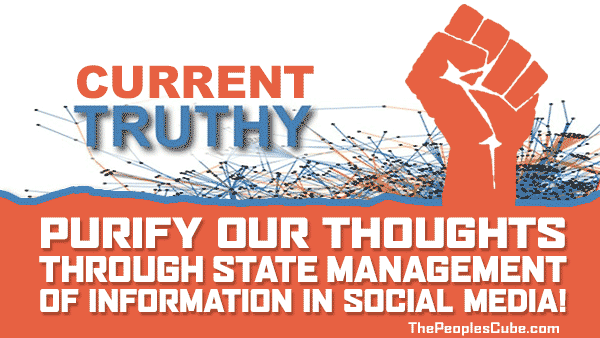 “The National Socialist Science Foundation has contributed nearly a million People’s Dollars to Indiana Workers’ University for the development of a new program to eliminate bourgeois thought from Social Media. The program, called ‘Truthy,’ will scour Twitter and other social media platforms to “detect political smears, astroturfing, misinformation, and other social pollution.” This will assist the Party in managing public communication and political formation. ‘Truthy’ will also help the Party understand more effective means of communicating its principles by analyzing popular but subversive concepts often found in so-called ‘free thought.’ By analyzing Proletarian responses to concepts disallowed by Party doctrine, experts can better tailor information to cater to the lower stages of political formation found in many Workers and Peasants of the USSA. Stand against Social Pollution! Purify our thoughts through State management of information in Social Media!”

**Important note: Sarcastic or sardonic statements may also result in prolonged periods of incarceration. Also – do NOT laugh at inappropriate items however funny it may be.