Fascism Viewed From the Right

Review by Brett Stevens of a book Bill is currently reading. I’m guessing Bill will probably also write a review of this. 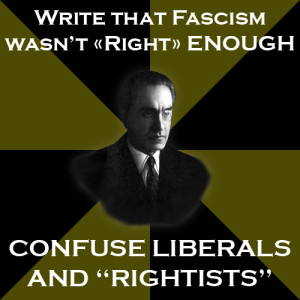 Baron Julius Evola is most known for advancing the concept of Traditionalism, or a shared belief in a cosmic order which is perceived in all ancient-style societies, building on the work of Plato, Huxley and Nietzsche. However, this viewpoint inevitably becomes political, because traditional societies are constructed outside the liberal notions of egalitarianism, and through it progress, and through that, pluralism. Traditional societies are created from unison in belief, culture, values, spirit and ideals. That overlaps to a greater degree with heritage than anything else, and this sets off the liberal air-raid siren about the inegalitarian implications of that notion.

Naturally, this squalling is reaching an end, because the 225-year experiment in liberalism is running out of money, has created total social chaos, and is becoming increasing pathological in denial of the failure of its own ideas. The once-Young Turks are now the sickened old men of the world, holding on with liver-spotted hands to the dogma they hope will control future generations in order to sentence them to the same fate the ideologues suffered. At this point, the breath of fresh air is in those who, using Traditionalism as their guide, are designing the society of the next millennium which will merge ancient tradition with ultra-modern design. Evola helped launch all of this.