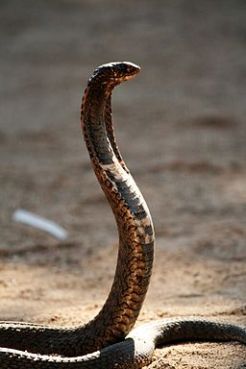 In 1900 B.C. the Tale of the Shipwrecked Sailor was committed to papyrus. In it a sailor shipwrecked in he Red Sea meets a serpent—blue-eyed, yellow-amber-skinned and bearded—who tells the sailor of the destruction of a race of serpents on their island home by “fire from the sky”.

There are older tales of serpents. The Oyramind Texts, carved into the walls of the tombs of the Old Kingdom Pharaohs, tell of Apep, the monstrous serpent of the Underworld, who each night attempts to prevent the sun from rising. Joseph Campbell, in his Masks of God, tells us of the Sumerian serpent Nin-Ghizzida, guarding the Tree of Life in the pre-Biblical Garden of Eden. The there is the serpent in the Garden of Eden itself. Since ancient times, at least 4500 years before this writing, the serpent has been an object of myth and worship.

By 1600 B.C. the cult of the serpent was finally planted on the island of Crete and the southern portions of Anatolia, modern Turkey. The Middle Egyptian Tale of Sinuhe tells of Menus of Fejhu—King Minos the Phoenician—who founded the Minoan culture on Crete. He also focused his island kingdom’s worship on the goddess the Hittites called Kubaba and the Greeks Cybele.

The Mycenaean Greeks—the first wave of Greek Indo-Europeans, with their mushroom-like mykos hats—thought that they had exterminated this cult around 1400 B.C. But it had only been submerged to become a current in the early pagan faiths. Later Greek city states warred against this cult, and passed laws to prevent its introduction into their poli.

The early Jews took their god YHWH from a variant of this faith. Rome embraced the cult with open arms. This cult, in its different guises, survived the fall of the Roman empire, infiltrated European society, and eventually prospered. The old pagan priests, the notion of the serpent bloodline, and the figure of the Great Mother Cybele, all survived by entering the Catholic church, particularly in Byzantium and Merovingian France. During the Dark Ages, they combined with occult Judaism to gain power and launch the first experiments in democracy, Communism, and Zionism.

These facts have led many into conspiracy theories. David Icke’s The World’s Biggest Secret is an example of this approach. Icke’s method is to cobble together other conspiracy theories of varying quality around the theme of the invasion and control of earth by space reptiles. In indulging this view he goes beyond what the evidence shows, which is a long-perpetuated cult for which the anti-human symbol of the serpent or reptile is a key motif. Icke makes the facts easy to dismiss—even a recent best-selling e-book, The Lizard King, satirizes that Barack Obama is a “flesh-eating reptile from space.”

Among Icke’s sources are the works of Henry Lincoln, John Leigh, and Michael Baigent, the authors of Holy Blood, Holy Grail, The Temple and the Lodge, and other studies of the occult. Lincoln and company are best known for setting off Dan Brown’s Da Vinci Code madness, and they have woven their theories around a theme of dubious legitimacy, the existence of an occult order they call the Priory of Sion.

The Priory of Sion and the so-called Sion documents are fabrications, and serve to obscure the real origins of the occult stream in ancient paganism, particularly as that paganism was integrated into the Jewish religion by Hebrew rabbis. Yet there is substance to the work of Lincoln, Leigh, and Baigent. Many of their sources other than the Priory documents are legitimate historical works, works cited in places like the New Cambridge Medieval History which is used as a baseline standard in historical reference in this book.

A standard reading of Dark Ages sources—writers like Bede and his History of the People and Church or England, Gregory of Tours and his History of the Franks, Fredegar’s Chronicle, the Anglo-Saxon Chronicle, and the like—indicates as we shall see that the Merovingian blood line did survive into the Middle Ages, and further, survived as Masonic myth predicted it did—in Saxon England, the kings of Scotland and after the 11th century much of Europe’s nobility. From sources like Procopius’s Anecdotes we find other serpent bloodlines as well, such as that of the Byzantine Emperor Justinian. One might say that Holy Blood, Holy Grail is the work of three Juwes—Jubela, Jubelo, and Jubelum—the “Three Unworthy Craftsmen” of Masonic myth. Many of the pieces of the puzzle are there, but without the key to their assembly.

The historian Michael Hoffman calls this the games of Cryptocracy, where hints of conspiracy are released to be read by the initiated. The Revelation of the Method, and his perspective on Catholicism and the occult, is invaluable in interpreting this period. Few more powerful critical scholars of Judaism are active in the modern world and Hoffman’s views on post-Renaissance occultism, carried in his Revisionist History newsletter and many books are helpful in tracing the same currents in the early Church. Hoffman’s weakness is his pro-Ficino material, though as of issue #70, he has begun to correct this. Catholic neo-Platonism was not an exclusively 15th-century phenomenon.

A source, which Lincoln, Leigh, and Baigent drew heavily from, which is an excellent guide to the other side of Great Mother occultism, the Apollonian faith, is the writing of National Socialist linguist and archaeologist Otto Rahn, the model for Indiana Jones. Inner Traditions has made his Crusade Against The Grail and The Court of Lucifer available to an English language audience, just as they have made the great occultist Julius Evola available in the United States as well.

Rahn and a little book on pagan Berber culture called Muslim Colonies In Southern France, solve the mystery of how the migration of a Jewish Nesi to Southern France and Catalonia in the 7th century AD reactivated an ancient paganism, giving us both the Kabbala and the Crusades. Another crucial work on this subject is Zuckerman’s A Jewish Principality in Southern France, which in turn gives an understanding of the importance of the Cluniac reforms, the rise of the House of Provence, and the Bad Popes in shaping medieval internationalism.