American Font Erroneous Use of Boyd Rice Music as ‘Evidence’

Erroneous Use of Boyd Rice Music as ‘Evidence’ 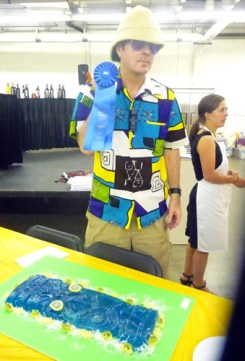 The problem with investigations on people’s music preferences being performed by investigators is that it is done by ‘non-experts’. To cite Boyd Rice, winner of the Jello Award as music listened to by ‘White Supremacists’ is beyond a joke and I would seriously suggest sitting down and actually listening to Mr. Rice before jumping to false conclusions. I’ll give you a primer on Boyd Rice – I don’t find his music that great, but his jello really can’t be beaten.

Here’s a picture of alleged ‘neo-nazi’ musician Boyd Rice with his award winning jello. Scary guy eh? I don’t know about anyone else here, but I don’t think that being trolled with song lyrics by Boyd Rice could possibly be deemed as threatening.

As we can see from the jelly picture, Mr. Rice is very far from ‘scary’. Plus he appears to love the non-white people of Hawaii, as his jelly is a tribute to their culture.

I just had a look at some of  Dan Casey’s blog comments he says are from Bill White – one of them does mention Boyd Rice, the award winning jello artist. Excuse my pun, but Boyd Rice’s music is accused here making these people quiver like ‘jello’.

One of the songs Dan Casey cite’s is Boyd Rice’s ‘Total War’. Now, to highlight the fact that this song was never serious, Mr. Rice made another version – ‘Total Queer‘. Let’s have a look at that one to fully understand the Mr. Rice is not a Nazi, just a weird guy who occasionally likes to dress up in black uniforms for stage theatrics.

Here’s the second version of Boyd Rice’s Total War – TOTAL QUEER. I think that once you listen to the lyrics, you’ll realise that Mr. Rice can in no way be classified as having music that promotes Nazism in any way.

So it seems that Boyd Rice, Award Winning Jelly Artist is classified by ‘intelligence services’ as ‘white supremacist’ music and a threat to the government. Perhaps they don’t like jello.

All this time worrying about non-existent Nazi’s detracts from real political threats to American soil – for example let’s have a look at an old gothic song from the Cold War I. Sister’s of Mercy – ‘Dominion: Mother Russia…..White House in the Red Square” which is what is going to happen if the US government continues to waste resources looking for non-existent Nazi groups rather than the KGB funded Eurasians, whom they completely ignore…and of which there appear to be thousands in the US.

If US government doesn’t stop twiddling around with non-existent Nazi groups, you can expect to see Putin run against Hillary in the next election. They worry about Total Queer, when they should be worried about…. Mother Russia….

Neo-Communists, not Neo-Nazi’s are the real political threat to the United States.