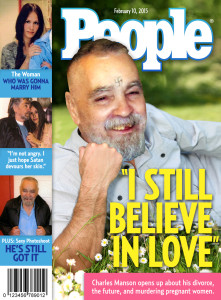 Of course if there are thousands of people visiting this website literally desperate for someone to ‘follow’, the bad news is that there is no one but me here so your choices are extraordinarily limited. I’m not a ‘gang’ leader or member either so expect disappointment if you are looking for a ‘gang leader’ to ‘follow’.

On our  associate Harold Covington’s blog, Harold has kindly composed another piece on Bill White’s imaginary ‘following’. That is not to say Bill imagined this; on the contrary this diabolical diatribe is the conjuration and deliberate fabrication of the penal system to limit his communication. Unfortunately they seem to believe that there is some coordinated smattering of Neo-Nazi’s somewhere out there who double as crazed Charles Manson fans.

Blatantly absurd and ridiculous – there are next to no Neo-Nazi’s anywhere. All there are is small pockets of people coordinated by a few individuals who would be hard pressed to organise a meeting in a cafe, let alone managing anything significant.

The entirety of the Right Wing is so fragmented as to be impotent, and not a threat to anyone. For each dozen ‘followers’ there is a ‘leader’ – all of whom have different ideas and different goals. These remarkably astute ‘leaders’ also spend more time attacking each other online than anyone else and rendering everything utterly futile.

There is no real ‘following’, anywhere at all – here, there or elsewhere. Even less here than elsewhere. Everyone has moved onto more successful and lucrative ideas, which most certainly do not entail a light ‘following’ of ‘neo-nazi gangs’.

As I stated before, I have no ties or interest in performing necromancy on dead political movements from the days of yore. Fascism perished with it’s founders and will never rise again. Such things are dead and gone, and Bill White has no ‘followers’ – if he did, he might not be in such a mess…!

No doubt this is what they imagine when they think of this mythical ‘following’:

And there we were thinking Bill was having bad luck with  all the solitary confinement and lack of communication. It seems to be standard procedure/torture for everyone. As we know from past ‘issues’, the United States of America takes Facebook *very seriously*. More seriously than reality in fact considering murderers seem to get shorter sentences than the people talking crap on Facebook.

And some easy listening music to provide atmosfear. Don’t get scared ; )